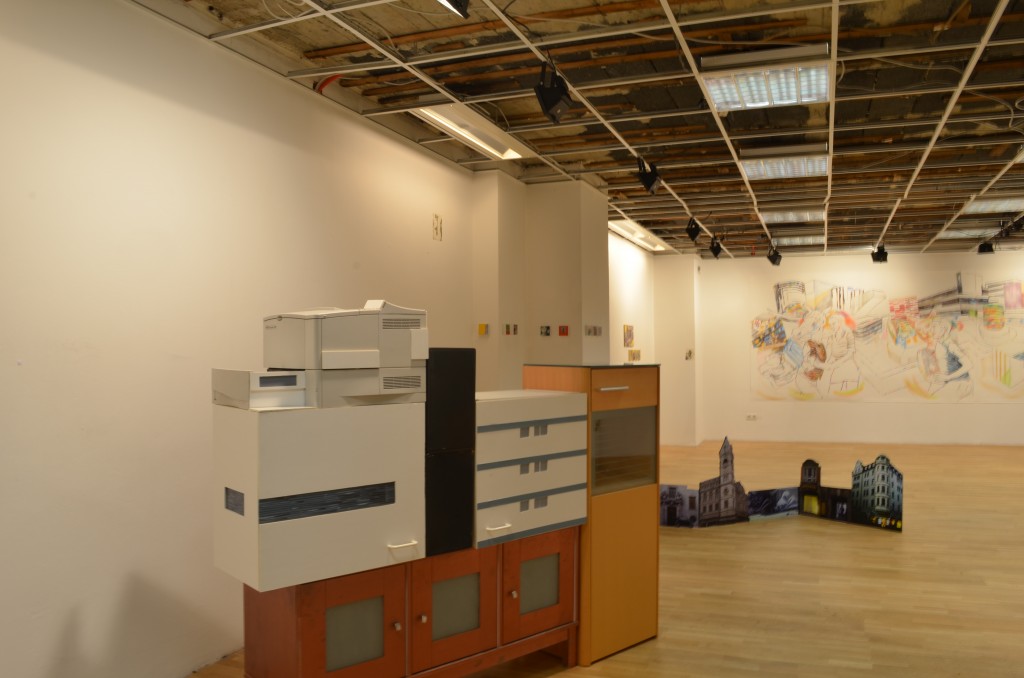 “Emigration Route” is an open-ended investigation into the connections between the experience of being a “stranger” or an immigrant  and  feeling a certain sense of “weirdness”.

In the “Secret of the Trio”,  the large-scale work on paper,  a  narrative has been crafted to create an effect of a mobility, a moving on. It depicts an arbitrary fusion, the permeation of the human with the animal, hybrid figures alongside domestic objects spread over the picture’s space.

The drawing consists of three parts.

To spread, to cover, to permeate became central to the picture’s evolution and its method. There are new and transitory relations in an “invaded” or freshly inhabited space; intuition is paramount in the formation of a new settlement.

Here, there is an attempt to grasp something non-human, or perhaps beyond human, in an almost haphazard tapestry of the city.  The atmosphere is at once dream-like and unsettling, there is an aimlessness that links the creatures to the city’s random construction. The techniques of the picture’s production reflect the waywardness of its stories. A mix of incident and accident, an element of the chance, even comic encounter.

The three dimensional works in “Emigration Routes” are constructed from discarded furniture, converted and covered to create a faux-architecture. They, like “Secret of the Trio”, play with ideas of material, value and scale to question ready notions of functionality.  The overall work draws on myth and a sense of flux though a kind of gilding or cover.
It admits an element of fantasy and fancy. A change of place changes the meanings of that place, its objects, its very physicality.